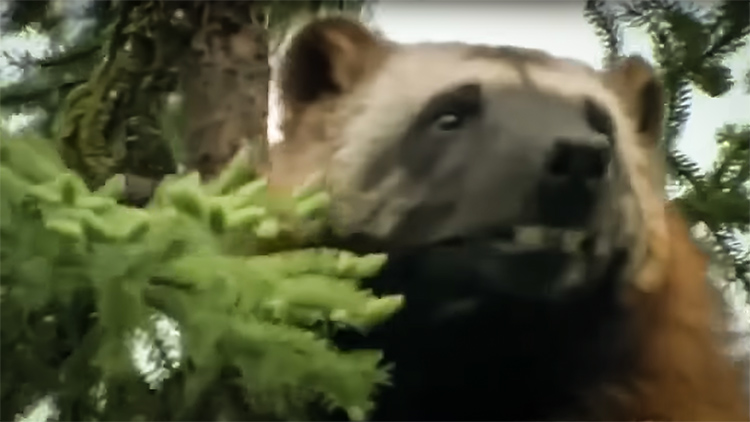 A fascinating glimpse into the life of the Wolverine. Called ‘Devil Beast’ and ‘Demon of the North’, the Wolverine has a reputation as being a ferocious ‘phantom’. But in real terms, little has previously been known about this beast, which roams the rugged and remote Northern wilderness and out-numbers Grizzly bears.

Doug Chadwick is compiling a new book about this elusive carnivore who is a descendent from an ice-age version of the Weasel. He describes it as; ‘Cool as anything’ and holds it in high regard. ‘They are bright and sociable’ He says; ‘They figure things out’

The film sets out to de-mystify this beautiful and energetic animal. Jeff Copeland heads the Wolverine Project in the Glacier National Park in Canada and says it is; ‘A marvel of the wild, that has a fierce appetite for survival’

The Wolverine is gluttonous but also fearless, fast, and adept at hunting. They will eat the entire carcass of their kill. A recent examination of a dead animal found the stomach full of bones. It is nutrients from this eating habit that ensures its survival during long winters, avoiding the need for hibernation.

Steve Crushall has worked with Wolverines for over 25 years and has been trying to breed them. As with Pandas or Polar Bears, breeding in captivity is rare. Out of 11 Wolverines born in captivity, only 1 survived. Steve successfully managed to get 2 births, or ‘Kits’, but had to hand-rear them as the mother died.

The various studies featured in this film confirm the Wolverine to be a sociable, inquisitive, and playful creature with strong family ties. The father will play a large role in the kits’ life, teaching and protecting them for at least their first year.

Audrey McGowan studies the Wolverine in Alaska and has recorded 27 Wolverines over a period of 2 years. While these are positive numbers, the Wolverine remains vulnerable due to Global warming as they thrive best of all in the long winters on the glaciers. If warming continues, their favoured habitat could be gone in 20 years.

2 thoughts on “Chasing The Wolverine”