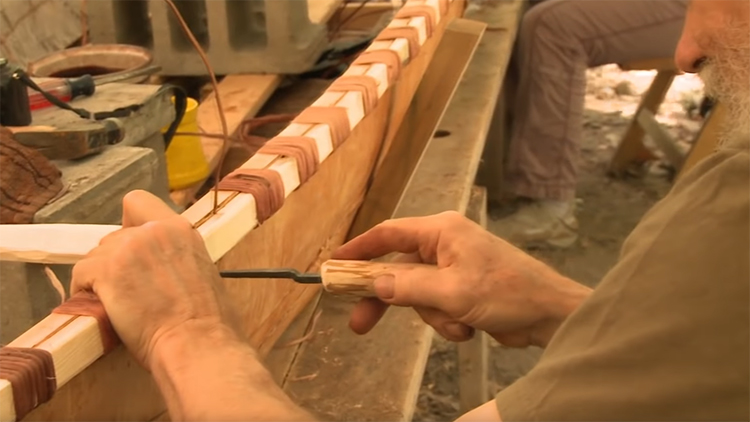 “Well I guess they consider me the canoe builder but most often I don’t build a canoe all by myself. Sometimes, other people are just interested. Friends, whathaveyou, various people just come by. And I guess I end up being more like the choreographer of the canoe-building event, if you wanna look at it that way.” begins Grant Goltz, Woodworker and Archaeologist from Minnesota.

The builders begin by collecting and processing spruce roots. They need to produce 500-600 feet of lacing.

One of the visiting builders in the above video is Kevin Brownlee, who is the Curator of Archaeology at the Manitoba Museum in Winnipeg. You can hear an interview with Kevin Brownlee on the Paul Kirtley Podcast, where he talks about how this canoe build came about, along with many other aspects of his work.

Once the spruce bark is sorted, they being work on the birch bark, first cleaning it up. Then a frame is overlaid and the birch bark shaping is begun, using the fame.

Jim Jones is one of the other builders in this video. He’s a Leech Lake Band member of Cass Lake, Minnesota. His Anishinaabee name translates to “Flowing Creek”, which his grandfather gave to him because he said he was always on the go. It seems to us it’s also a fitting name for a canoe-builder!

Amidst the building, Goltz states “This is… an artform and a thing that native people were not doing anymore. So, when we set out to start building canoes, we thought that someday we’re gonna want to teach more native people some of their old traditions”, before he tails off…

He pauses, then continues “You know, I’m a white guy. This is not my culture. I’m dealing with someone else’s culture. I think I have an ethical obligation to represent that as best I can; as correctly as I can. You might say I’m walking on foreign turf and I gotta watch my step, you know. So I try to have respect for someone else’s culture ‘cos they own it, I don’t. That’s one of the reasons we go through the pains we do, to try to do these canoes as close as we can based on what is knowable.”

“People sometimes uses this word that I don’t like. They say primitive. Well, there aint nothing primitive about a birch bark canoe. Cos the word seems to have kind of a negative connotation to it. But when Europeans came over here, they had big wooden boats and ships; what did they use? They used the birch bark canoe. They didn’t use the primitive technology to get around, they used the superior technology, to operate the fur trade.”

And so in this video, this small group build a traditional birch bark canoe, a craft of incredible beauty and design.

It’s an involved process, though, taking multiple days. “Being part of that building and watching her come together. It’s a connection and a bond with develop with each boat that we build, because part of us goes into these pieces. And that’s what I enjoy out of building these canoes here, it’s what we share and what we put into it.”, explains Jones.

What’s even more wonderful about this build is that the canoe is a wedding gift to Kevin Brownlee and Myra Sitchon, both of whom also helped build it.

As well as the personal aspects of this canoe build, there is also a professional perspective. “Most of us working on this project are archaeologists by training. We always try to figure out what was going on in the past and how people did things in the past. It humanises our work and makes it more interesting to me as an archaeologist and to the First Nation or tribal groups in northern Manitoba. I think that’s just great to get that across to them, that the human side of it. Just the process of doing it; how many hundreds or thousands of years have people been peeling roots, preparing birch bark, doing exactly what we’re doing?” wonders Brownlee.

“People don’t realise the incredible sophistication of a lot of this technology. They also don’t appreciate a lot of the spriritual aspects of it either.”, states Christy Hohman-Caine, Anthropologist and Archaeologist. “If we’re taking birch bark off a tree, we leave an offering to the tree. It’s a sign of respect for the gifts that the forest has given us and also for the whole gift, the whole invention of this technology by people who came before us.”